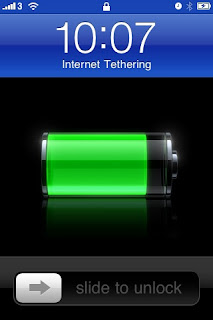 Internet sharing using a mobile phone as network accesspoint, also known as tethering is a good thing. I’ve got it easily up and running on my HTC Desire (over wifi), my Nokia E71 (over adhoc-wifi) and now I’ve got it working on my gf’s iPhone. This post is about that.

Thank’s to this url I could easily get it up and running in a few steps summarized as follows:
– Be sure that your other network connections (ex Wifi) are disabled
– pair the devices (I used the ubuntu standard bluetooth icon in the panel). Setup new devices or whatever…
– follow the guide (paste the apt commands to add repository and install blueman)
– run command blueman-manager
– find the iPhone in the list, choose Network – connect, or setup and then choos network connection.
– You should get a success message or get some indication of that you are connected to the device and using “network…”.
– in a terminal run ifconfig
– you should se an interface named bnep0 probably
– get an ip from the iPhone by running the command: dhclient -i bnep0
You are now connected. At least I was =)
If not proceed with normal network troubleshooting using bnep0 as your external network interface.

The howto on the link above also describes how to tether Ubuntu and an iPhone over USB instead of bluetooth. That I haven’t tried… yet.